I have been having an absolute blast cooking lately. Usually I’m all about creating the smallest mess possible, using the least amount of pots/pans/utensils, but not last night. Last night I proudly use 3 burners all at once with a spoon/spatula in every pot and or pan. I really wasn’t whipping up anything fancy, but I still felt pretty awesome.

I had a handful of leftover shrimp that I didn’t want to go to waste so I wanted to come up with something that would be good with shrimp, but not feel like there wasn’t enough shrimp. Solution: Chicken and Shrimp Pasta. Like I said, nothing earth shattering, but it was seriously delicious and isn’t that what really counts?

I started off by covering the chicken in some italian seasoning, pepper, garlic powder, and chicken seasoning. I threw the chicken into a hot pan sprayed with some olive oil, letting it get slightly golden on each side, and then covered it with a small can of tomato sauce. After that I honestly sort of forgot about it for 10 or 15 minutes while I chopped up veggies and watched some TV so I have no idea how long it cooked. After that I threw some broccoli and mushrooms into a steamer basket and started cooking the pasta. !0 minutes later I threw everything on a plate, microwaved the leftover shrimp and thew them on top and topped everything off with some extra sauce.

I guess in the past I hadn’t really paid attention to how I cooked my chicken. Usually I just throw it in a pan and hope it turns out good. This time I waited for the pan to get hot, seared both sides and then let it cook slowly. It really made a huge difference! The chicken was so moist and flavorful.

For lunch today I used some of last nights chicken to make a healthy sort of chicken parm sandwich. 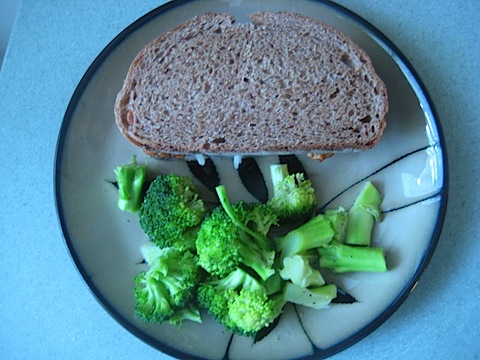 Leftover chicken in tomato sauce and some mozzarella cheese on rustic whole wheat bread with lemon pepper broccoli on the side.

I think the chicken was even better than it was last night. I guess maybe all the lovely flavors from the tomato sauce were able to sink in even more. I’m almost always a fan of leftovers. There are a few things that definitely do not get better after a night in the fridge, but sooo many do. Are you a leftover lover?

My snack today had nothing to do with leftovers, just a simple orange with some plain yogurt and a drizzle of real maple syrup. Until recently Navyguy and I were both sugar free syrup users. We got into the SF syrup while I was calorie counting and since we don’t use it all that often we just recently ran out. We had a long debate in the grocery isle recently about the pros and cons of switching to real maple syrup instead. What it came down to was that we both wanted to cut out the chemicals from the SF stuff, but both of us were afraid of the high calorie count on the good stuff.

Luckily, the real maple syrup won the fight because it sure tastes a heck of a lot better. I’m hoping that because it does taste so much better we just simply won’t need to use as much. It definitely worked for my yogurt, just a small spoonful was more than enough flavor and sweetness. I don’t want to overhaul my kitchen and let good food go to waste, but as we run of certain things my goal is to start replacing them with their more natural or original versions. Some things I’ve already switched are margarine for real butter and Pam for an olive oil misto.

Have you made any big food swaps lately?